Fans and Visitors of the Official WHVFD Site,

First and foremost, for those of you who follow this page regularly (You guys are awesome!), I would like to apologize for not posting anything in just about three months. I recently got hired as a career firefighter, and have been very busy and focusing most of my time and energy on that (Gotta make a living, right?). I did recently build a new rig (Below) that is modeled off of my first due Engine at work.
Washington Heights is still around! I recently dusted off my rigs and tinkered around with them for a bit the other day. The future for the WHVFD beholds numerous rigs including a spare aerial, spare TAC, more support pumpers, the possibility of stations and finally some EMS rigs. For now, things will remain dormant until Fall sets in, as things will be slowing up at work, and my girlfriend will be off at College. Until then, I thank you guys for your continued support and questions, it really means a lot! Lego will always be a big part of my life so rest assured I'll be back soon! 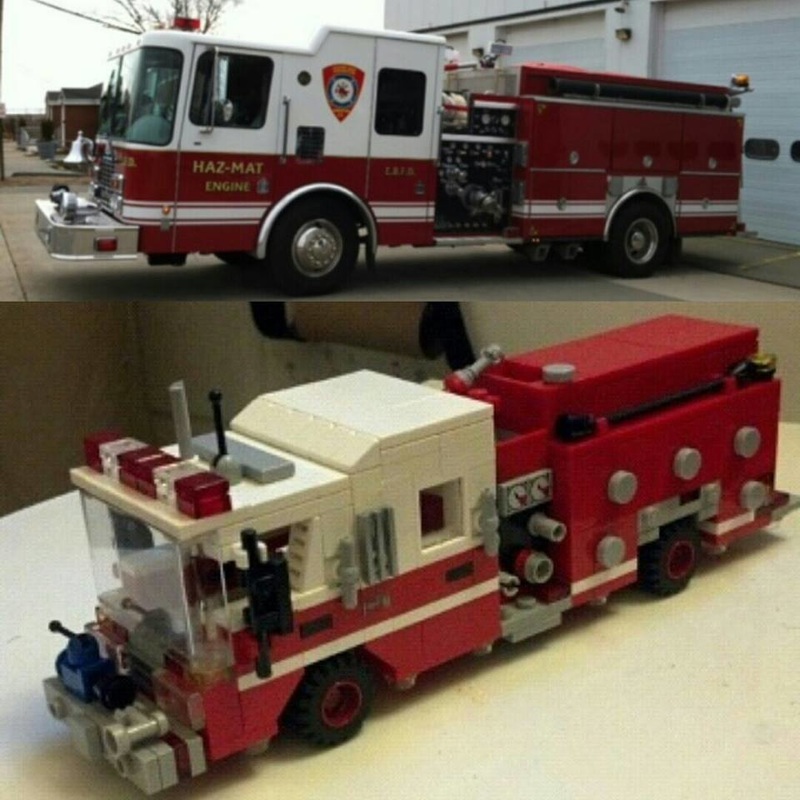 This past week, members have been busy preparing for the annual Memorial Day Parade in town. It was decided that Engine 1-12, Tower Ladder 4-12, TAC 1-12, and Engine 4-12R would participate in this years event. The apparatus were washed and waxed, chrome polished, wheels touched up, hose packed neatly, tires shined, and had American Flags attached to them to honor our fallen veterans who fought and lost their lives defending this great nation. Firefighters marched in front of the apparatus sporting banners and a color guard, while the cadets threw candy to the children. Afterwards, everyone met back at the Company Two fire station for a cookout and music. Thanks to all who participated and to all of the men and women who served! 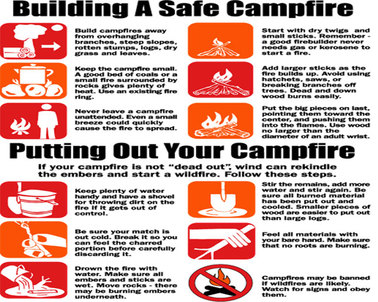 Fire in the grill, under hot dogs and burgers, is a welcome sight at the family cookout. But fire anywhere else can make your summer kick-off barbecue memorable for all the wrong reasons. The following are tips from the National Fire Protection Agency (NFPA) and the Washington Heights Fire Department.

Members spent the day at Moon-Lit lake along with Waterways Fire Hose Testing testing all of the hose on the department's apparatus. The day started off early, as the first two engine's hose loads were dumped and tested, all without issue. The company and Heights firefighters worked for the rest of the day unloading and repacking all of the hose on the apparatus to put them back into service. Thanks to all who helped! 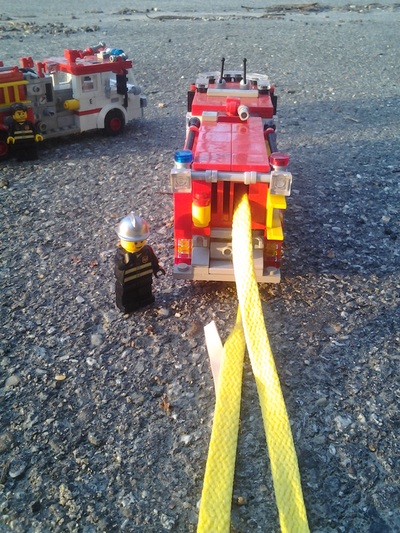 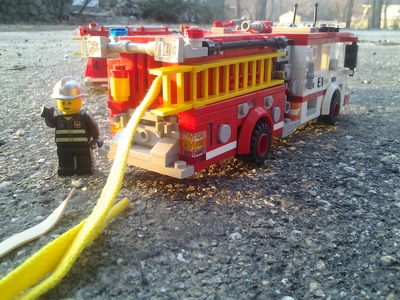 Members spent the evening testing out the new foam engine recently delivered from Pierce Manufacturing. The new Pierce pumper is equipped with a roof mounted turret capable of flowing foam. Foam 1-12 along with Tanker 1-12 and Engine 1-12 took a ride to the High School where newer drivers got some experience pumping, supplying, and drop tank operations.  Thanks to Captain Potter for the photos! 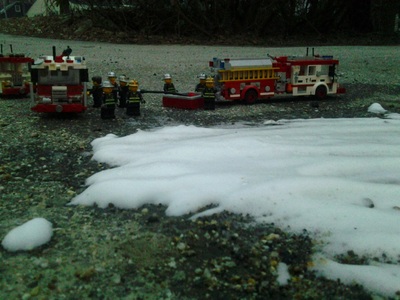 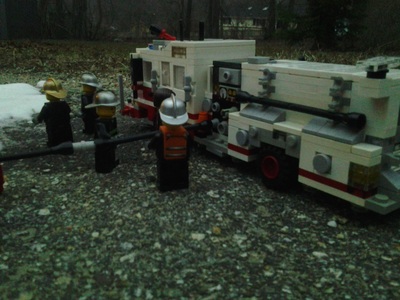 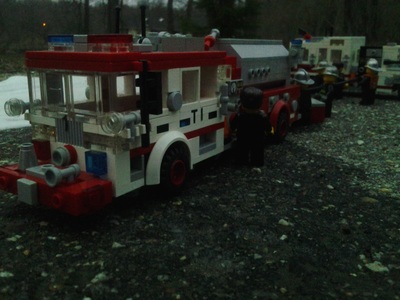 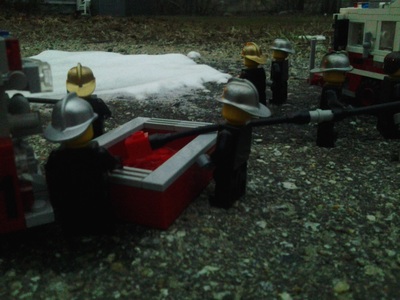 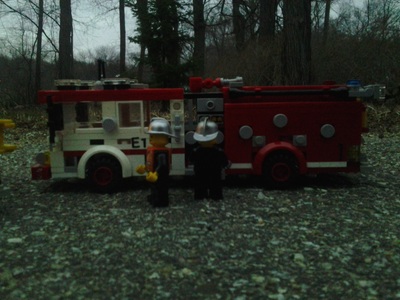 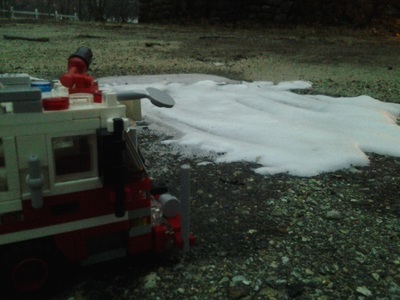 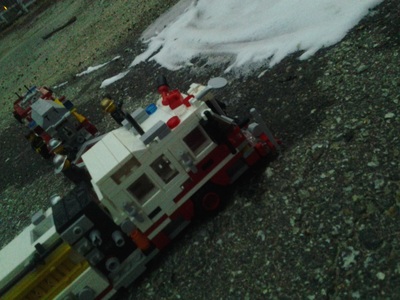 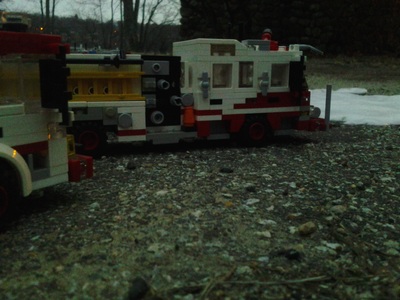 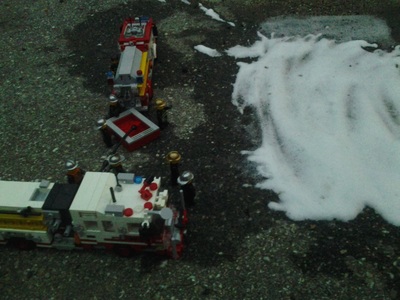 Washington Heights firefighters along with other firefighters across the East Coast honored the loss of Fire Police Captain John Doster, Sr. Past chief of Bristol Township Fire Company. Doster passed away on April 2nd, 2015, at the age of 96, with 80 years of service to the Fire Company. Rest easy brother, and thank you for your service. 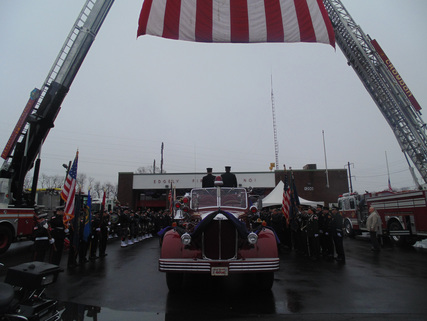 Chief Morris announced to the membership last monthly meeting that funding has been approved to purchase another Tower Ladder in addition to the Foam Pumper already in production. Since the previous foam pumper was sold two years ago, and the department is currently without a rig that can deliver large amounts of foam, it was ordered first. A committee was been formed and has been meeting for the last few months designing the new rig. The contract was awarded last month to Pierce Manufacturing in Appleton, Wisconsin. The committee explored many options such as refurbishing a used piece of apparatus and retrofitting a current rig. The decision was made to purchase a new rig since it would not tie up a front line pumper and there would not be any concerns of finding parts and extra upkeep with an older rig. The new pumper is expected to be delivered within the next few weeks and the new Tower Ladder is currently on the drawing board.

Monday night (3/2/15), Washington Heights firefighters responded to the City of White Ridge, as they were handling numerous working fires. Official reports from White Ridge officials state convicts escaped Brick Penitentiary, leading area authorities on a chase and into gun fights. The cons started fires "ranging from grass fires to warehouse infernos" as city officials put it. Due to the high call volume and multiple agencies involved, March 2nd has been labeled as "Hell Night" by first responders.

The Washington Heights Volunteer Fire Department is trained and equipped to respond to all sorts of fire and rescue calls, but now they are part of a new attempt to prevent fires from claiming lives. Starting Wednesday nights from 6:30 p.m. to 8 p.m., the fire department will provide up to two smoke detectors per household to anyone who needs them. They are able to provide the detectors because of a donation of 100 from Home Depot.

Safety Captain Timothy Edwards will be heading the mission. This program is even more important to firefighters as statistics about children’s deaths in fires rise. Edwards said according to statistics, 15 children died as a result of a fire in Ohio, and this year has already seen 11 casualties.

Edwards, and other fire safety enthusiasts say residents should use the upcoming Daylight Savings Time as a reminder to change their smoke detector batteries along with their clocks. The Washington Heights Volunteer Fire Company is always looking for more ways to raise awareness and increase fire safety in the community. Edwards is hoping to find a business willing to donate carbon monoxide detectors, so the department can help residents install even more safety measures. Residents can pick up detectors at the Washington Heights Fire Company 1, located at 94 Maplewood Court. Smoke detectors will be given while supplies last. 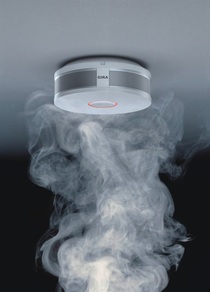 This evening, the Disaster Preparedness training event was held at the Company 1 fire station. Chief Morris opened the class up to mutual aid companies, so that everyone could have the opportunity to learn and prepare for serious emergencies and disasters.  The topics covered in the class included: Pre-Incident planning, response modules, crew tasks, triage, recovery, public assistance, and post-incident review.  We would like to thank our friends for joining us for this learning experience!

"Disaster Preparedness" Training at the Heights - 2/15/15

The Washington Heights Volunteer Fire Company will be hosting a disaster preparedness class on February 22nd, 2015, being put on by the American Red Cross. This training session will cover how to prepare for, respond to, and recover from natural and man-made disasters. The training begins at 0900 and is open to any departments who wish to attend, their is no cost for this class, as it being funded by the American Red Cross.

A long duration snowstorm is expected through Monday night bringing total snow accumulations of 12 to 16 inches with wind gusts of up to 25 miles an hour. The snow will start tonight and continue into Monday night without much break. Visibility will be within a quarter mile, and high snow banks could also impact vision while driving. Keep an eye on roofs with the added snow weight, and watch out for slippery roadways. 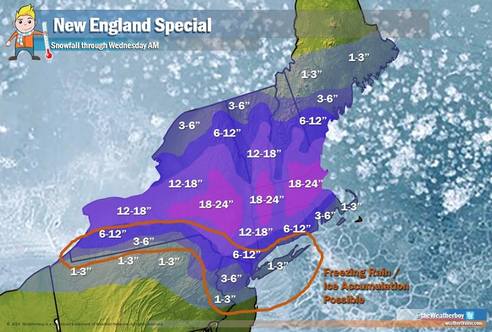 A Winter Storm Watch remains in effect from late Sunday night through Monday evening, this storm could bring heavy snow accumulations of 6 to 10 inches with winds up 20MPH and gusts up to 35MPH. The snow is expected to start early Monday morning and continue through the day, ending by Monday night. Temperatures are expected to range from 5 below zero to 8 above zero. Snow covered roads and winds could lead low visibility and hazardous travel, use caution. Thank you to Channel 9 News for the photo. 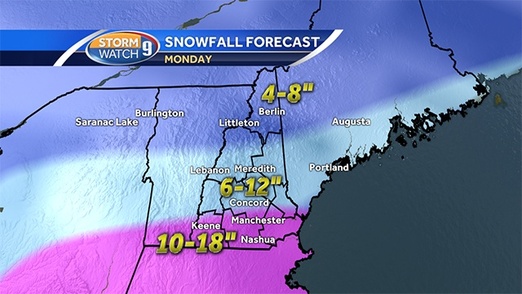 Firefights manned fire stations across the city this evening and will continue to stand by until Tuesday night to handle emergency and storm related calls. Crews are standing by to ensure a faster response to calls for service and so volunteers do not need to respond from their homes to their respective stations. Apparatus have had tires chains placed on their rigs, as well as putting spare apparatus into front line service for second or third calls. We will continue to monitor weather conditions and keep you up to date with the happenings of this winter storm and events in our community.

The National Weather Service has issued a Winter Storm Watch for our area, in effect from Monday afternoon until Tuesday night, and may linger into Wednesday. It is expected to be in Southern New Hampshire on Monday, and in the mountains of Central Maine by Tuesday.  Snowfalls are expected to be a heavy 10 to 14 inches, with winds from 10 to 20 MPH, with gusts of 30 MPH. Use extreme caution if you have to travel, as there will be low visibility. Thank you to Accuweather.com for the photo. 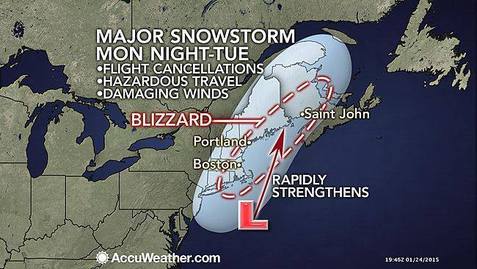 Company One held its monthly maintenance night as the drill  tonight. The apparatus were washed, waxed, and had their equipment checks done to ensure readiness for the next run. Tonight was a sight to see, as all three Mack CF apparatus were at Company One. Members joked, renaming the fire station "Mack Attack. Engine 9-12 is being housed at Company One until station nine is opened, and members have assumed responsibility of caring for the engine. 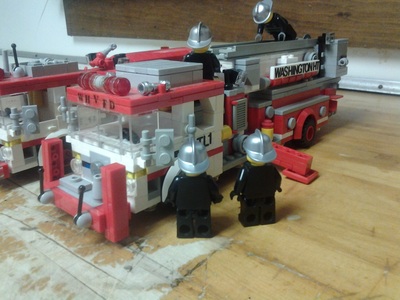 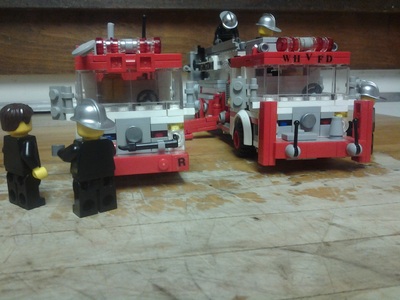 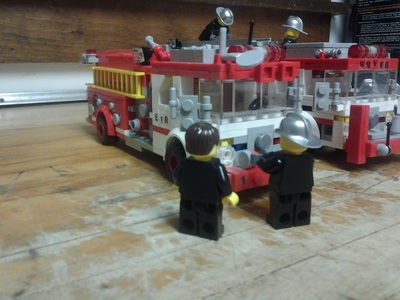 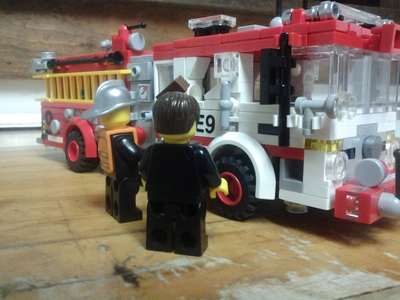 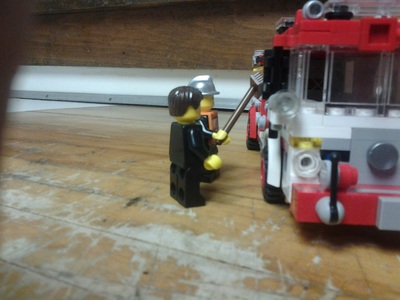 Engine 9-12 received its rig back from Fallout Fire Equipment and has many, many upgrades from emergency lighting to a fully enclosed cab. Other modifications to the pump and body layout were done to make the rig NFPA compliant. Engine 9 does not have an assignment, but will in the coming weeks. Thanks for a great job done by Fallout Fire Equipment as usual!

Here is a before an after shot of Engine 1-12 before and after it went through complete refurbishment done by Fallout Fire Equipment. Modifications were done to the body and compartment layout, emergency and scene lighting, radios, bumper, cosmetic work, pump, and cab layout. We would like to thank Fallout Fire Equipment for a job well done as always and we look forward to Engine 1-12's continued service to our department! 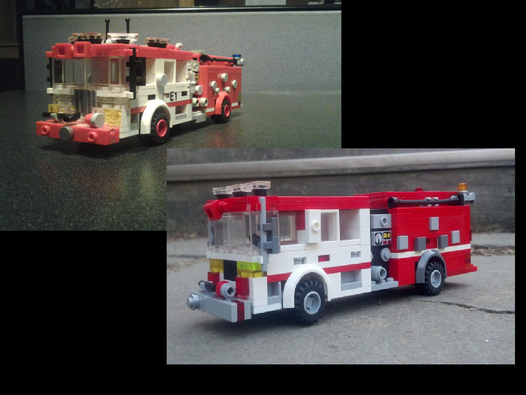 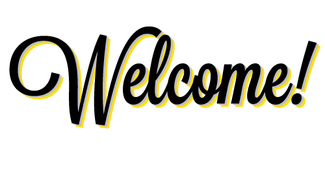 With the impending consolidation of emergency services and as county based fire, rescue, and EMS services start to form, fire department officials are beginning to plan and purchase apparatus to support this new system. Included in these plans are new apparatus, refurbishment of spare and former apparatus, and re-designations of apparatus. Engine 2R began its service life as Engine 2, and is now being pressed back into front line service as Engine 9, operating out of Station 9. Members on the committee went to Fallout Fire Equipment today to do a final inspection of the rig, and snapped a photo of this group of rigs below, all formaly serving the Town of Union, in Fallout's graveyard, awaiting disposal. We will post the final build shots of Engine 9 when all graphics and striping have been applied!