​Merry Christmas and Happy Holidays from all of us here at the WHVFC. Have a safe Holiday Season! 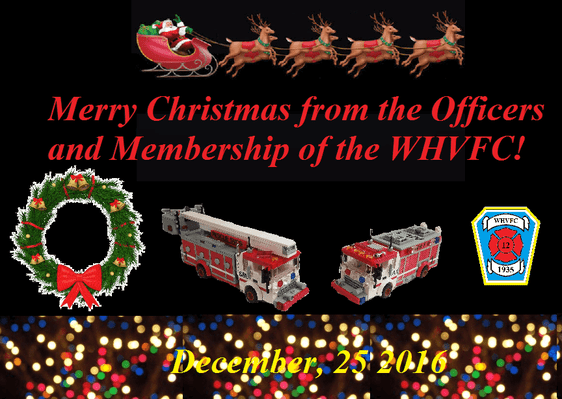 Late Thursday Evening, Engine 11-12, staffed by the live-ins, responded mutual aid to the neighboring town New Preston for a reported structure fire with entrapment. This fire brought in help from numerous surrounding towns and resulted with two fatalities. For the full story, please visit our incidents page! 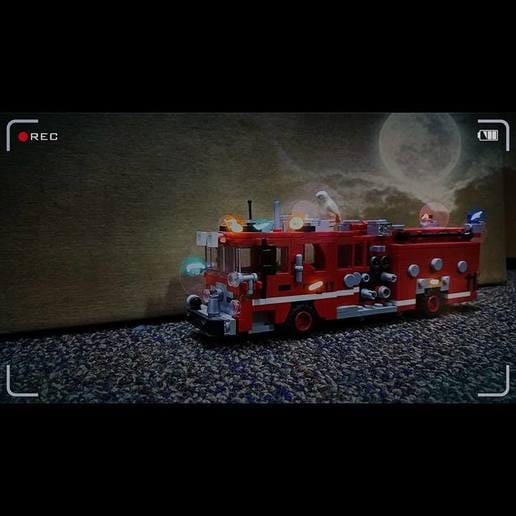 Wishing you a safe and happy holiday! Enjoy your Thanksgiving bird!

The squad company of the Washington Heights Volunteer Fire Company was born in 1984 when an old Engine was re-equipped and repurposed to run as a rescue engine. The original rig carried rescue tools for car accidents and equipment to start a rope rescue and water rescue.

At the time, the city only had one heavy rescue quartered downtown at Headquarters. "Squad 1-12 was running out of Station 2 on the opposite side of town. Two rigs had been ordered from S&S on Ford C cab and chassis for use by the newly formed squad company. and in 1985, the city accepted the two new rigs from S&S.

The two rigs were lettered as Squad 1-12 and Squad 1-12A, similar to the Chicago Fire Department's Squad Concept. Squad 1-12 was a box style rescue truck, while Squad 1-12A was a 55FT Snorkel. These two rigs ran side by side to many rescue calls until the department opted to return to a rescue engine style squad in 2011.

These two rigs still serve the department out of their original firehouse as Air/Light 1-12 and Special Service Unit 1-12. More information on these repurposed units can be found in the apparatus section. 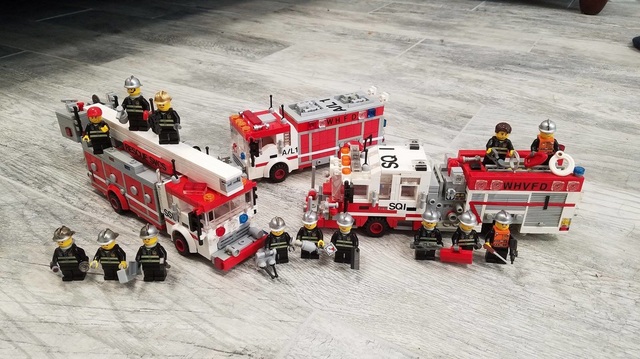 ​The Washington Heights Volunteer Fire Company is selling t-shirts in honor of breast cancer awareness month.  The money raised from the shirts will be donated to the New Hampshire Breast Cancer Coalition, which provides financial support to those battling the disease in New Hampshire.

Over the years, the Washington Heights Volunteer Fire Company has donated more than $50,000 to this organizations and say this is their way to help the community outside of putting out those fires.

“Basically the foundation of what the fire department does is help those that need help,” said Heights Fire Chief John Morris. “So this is just one way we can do it when there’s not a fire and there’s not something or emergency going on, but a lot of people still have issues everyday. So it’s important for us to try to help with this.”

T-shirts can be purchased at Fire Company 1 (Department HQ), near the Downtown Square. 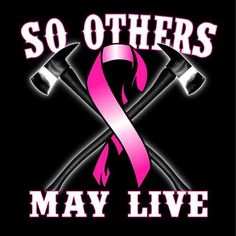 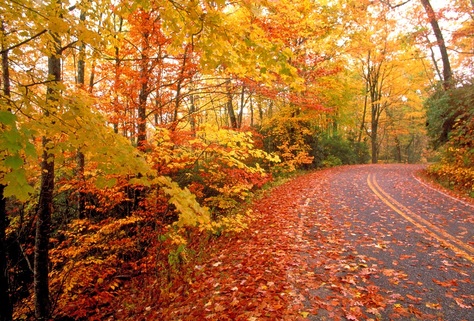 This morning chief officers from both the Washington Heights Volunteer Fire Company and Brick Borough Area United Fire and Rescue met to discuss and layout a new mutual aid contact. This plan and system of pre-planning resources allows for a faster response of units during times of need and major emergencies, working to better the citizens and visitors of our city. In return, Washington Heights is agreeing to send Brick Borough apparatus in their time of need as well. The following reflects today's meeting.

A well kept secret has finally been let out. By the end of the month, Saint Christopher's University will officially have their own fire department on campus. After many years of failed budget requests, enough donations have been raised and this dream has become a reality.

A 1989 Mack CF/Pierce engine was bought used from another local department and is currently being refurbished by Pierce Manufacturing in Wisconsin. Equipment has been purchased, donated, and acquired and will be put into service on the engine as soon as it returns, which should be sometime next week. The rig will go into service as Engine 11-12, and will be the only Washington Heights rig without one of the traditional red and white color schemes.

The department will be using an old building that has been retrofitted to accommodate firefighters for the live-in program, which will now be run out of Station 11. The remodeled building includes a kitchen, bunk room, day room, training room, tool room, EMS room, offices, and live in spaces.

We will keep you updated as this exciting new asset to the WHVFC unfolds.

The two new hires, Firefighter/Paramedic Ryan and Firefighter/Paramedic Olson, for the Washington Heights Regional Airport and Washington Heights Crash-Fire-Rescue went out today with Medic Engine 112 and Fox I to familiarize themselves with the foam systems on an old, unused runway. They went over proportions, patterns, application  methods, uses, and different types of foams for each rig. Good work guys! 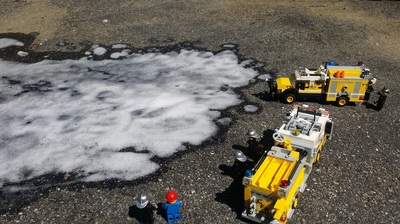 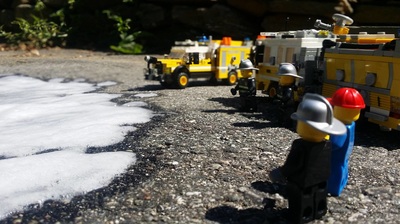 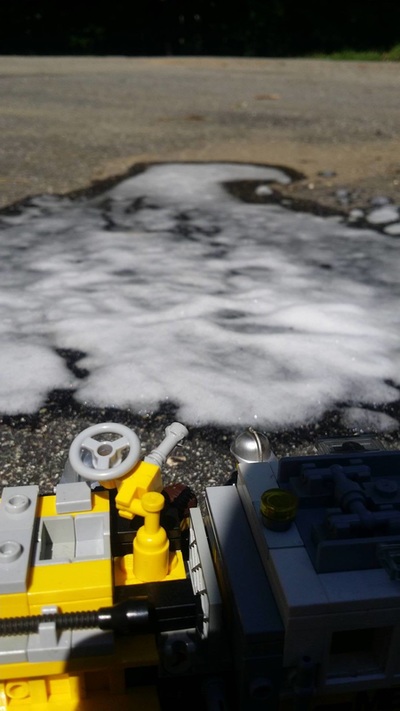 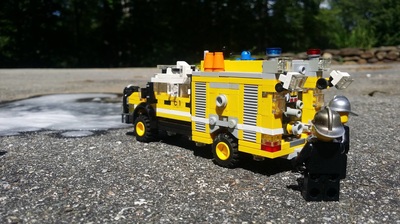 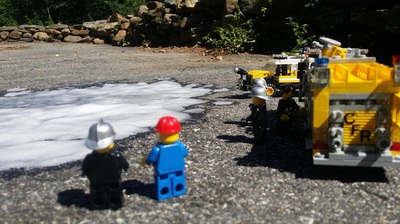 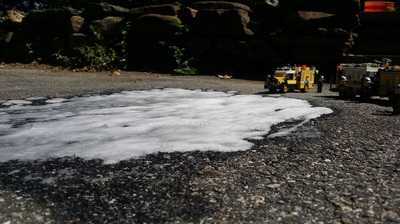 ​The Parker Hose Company is an independent, non-profit entity that is not funded by the Town of Union, unlike Unions other fire company, The Strand, on the other side of town. The chiefs met behind closed doors and not many details have been released, but the Parker Hose Chief stated afterwards "I believe after these meetings, there will be a positive outcome for us all.". We will keep you informed as this situation evolves. 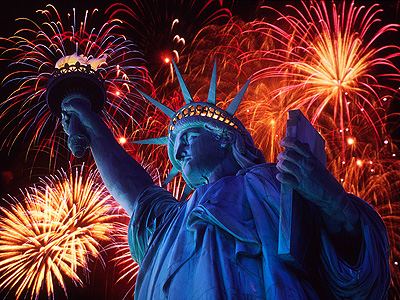 Happy Independence day from the Washington Heights Volunteer Fire Company. Get out there and enjoy the beautiful weather and weekend. Be sure practice safe boating, be careful with fire works, and drink responsibly! Don't take it personally, but we don't want to see you!

The call volume continues to rise for all ten of Washington Height's Fire Stations, and to be proactive and help out our dedicated volunteers, the chief officers have began looking into the idea of hiring career personnel to supplement Heights' Volunteers.

This new concept would have three personnel on 24 hours a day, 7 days a week at two of the department's stations. These firefighters would also be certified as Emergency Medical Technicians and would first respond any medical emergency in their stations first due. Initially, the stations with career staff would only cover the busiest areas, but as time goes on and more funds are available, their coverage would expand and they would staff more stations.

These firefighters would also not be assigned to a dedicated rig as of yet, they would take the most appropriate piece of apparatus or more than one of the type of call warrants it, for example, a forestry unit and an engine for a brush fire.  As time goes on and staffing increases, they would be assigned to a rig (I.E. Engine, Truck, or TAC)

This is a very new concept and the volunteers have been very open to the concept. We will keep you updated as time goes and this program advances.

For the longest time, Washington Heights Fire ran two Hose Wagons. They were set up as structural pumpers, carrying hand tools, SCBA, attack lines, in addition to multiple seating positions as firefighters. about 5 years ago, the city replaced them with two standard frontline engines, eliminating the Hose Wagons from The Heights.

Due to the recent industrial boom and some planning from the Office of Emergency Management, it was decided to again purchase hose wagons in the event of a large fire or failure of the city's hydrant system. The apparatus could lay their hose and draft from Moon Lit Lake and supply the units fighting the blaze, essentially creating its own water main.

The new Hose Wagons, dubbed Wagon 1-12 and Wagon 2-12, are much different than their predecessors. The are built on two-man Seagrave Marauder II cabs with low hose beds. The hose bed carries 3000FT of 5" LDH supply hose, among other sized hose lays. They carry ground ladders, SCBA, hand tools, and other equipment to act as a structural engine if needed, however, it will not be their normal task like the previous apparatus.

These rigs boast 2250 gallon per minute Hale Pumps with 40 gallons of Class A foam and 300 gallons of water on board. This rigs will continue to be a vital asset to the City of Washington Heights for many years to come, and a huge thanks to the committee that designed these apparatus!