The City of Washington Heights

The Town of Washington Heights, New Hampshire is 54.8 sq. miles, 14.3 of which is water. The population of 22, 787 people (2010 Census), flourishes during the work day and almost triples during the Summer and Fall tourist seasons.  The response area is primarily lake and beach front housing and shops and a downtown section with businesses and some housing.  There is also a small industrial area, including shopping centers and some manufacturing.  Located on the coastline of town is the harbor, an area of town known as Washington Village.

On average, we respond to about 8,000 calls a year, however this number is increasing with every year depending on weather and other factors.

The Washington Heights Fire Department currently staffs three fire stations. Each of theses fire stations are know as a company. (I.E. fire station 1 would be Company 1.).

Seeing as how the WHFRE covers such a large area and has many stations, dispatch requests certain apparatus depending on location and nature of the call. Sometimes if a serious emergency comes in, dispatch will tone out an "All call", meaning all stations will respond and callbacks will be conducted to staff reserve apparatus.

Since ambulance transport and coverage is provided by the Washington Heights Emergency Medical Service, the fire department is only responsible for first responding, or R1. 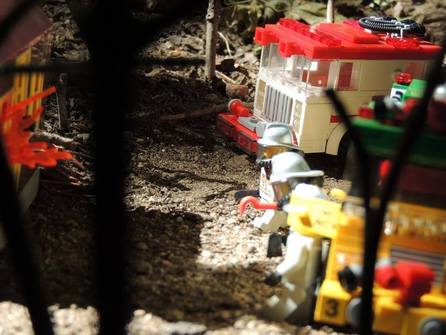 Engine 7-12 on scene with White Ridge firefighters during the "Middle Notch" Wildfire assisting during a structural assignment.